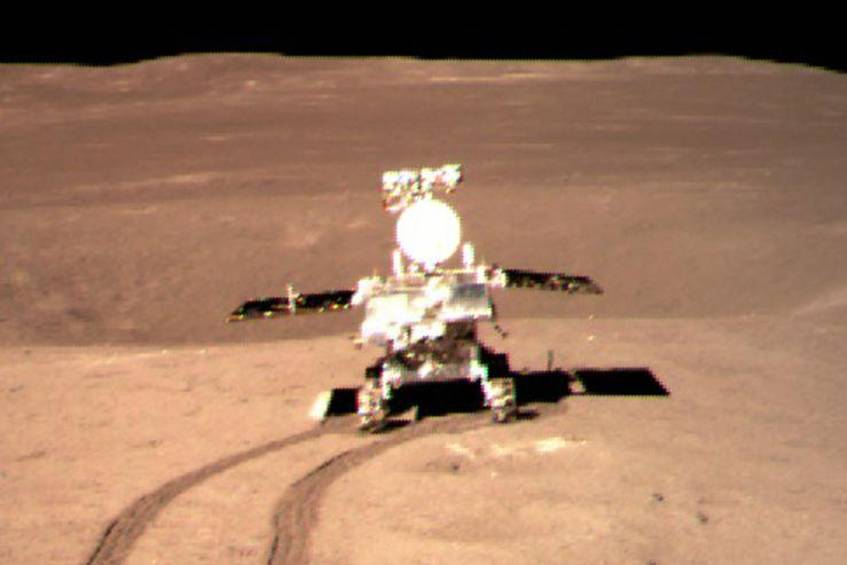 China is not only catching up with the development of conventional road vehicles , but also in space, the emerging nation is active. The Chinese Jade Hare 2 is the first vehicle toexplorethe back of the moon.

China has landed a probe softly on the back of the moon with “Chang’e 4” as the first country in the world . The landing site is the Von Kármán Crater (180 kilometers in diameter) in the South Pole Aitken Basin (largest impact crater on the Earth’s Moon and currently the largest known of the solar system). The first videos recorded and broadcast by this cymbal are considered spectacular – after all, there were only photos of the dark side of the moon and they were shot by probes passing by from space. Now the China National Space Administration (CNSA ) is launching the next research step: a rover carried by the provincial probe, so a robot vehicle, has successfully set off from the lander. While the probe Chang’e is named after the Chinese moon goddess, the rover is called ” Jade hare 2″.

The Jade hare 2 moves electrically driven with six wheels on the lunar surface. The rover is 1.5 meters long, one meter wide and one meter high. He weighs 140 kilograms, the landing unit brings him together 1,200 kilograms on the scales. Both the lander and the rover carry out geophysical measurements on the moon, for which they carry measuring instruments. This so-called scientific payload comes, inter alia, from Germany, the Netherlands, Sweden and Saudi Arabia.

The Jadehase 2 is equipped with a panoramic camera, a ground radar (LPR: Lunar Penetrating Radar), an infrared spectrometer (VNIS: Visible and Near-Infrared Imaging Spectrometer) and an energy analyzer (ASAN: Advanced Small Analyzer for Neutrals). The analyzer was developed by the Swedish Institute for Space Physics (IRF). He analyzes neutral atoms and is to investigate the interaction of solar wind with the lunar surface and perhaps even decrypt the process of water formation on the moon.

Manned moon landing as a target

During the mission of communicating Jadehase 2 with the Lander and the members of the Mission relay satellite Queqiao. The satellite was launched in May 2018, Lander and Rover started half a year later in December 2018 towards the moon.

The first Chinese lunar mission, Chang’e 1, started in 2007, and future missions Chang’e 5 and Chang’e 6 are expected to send soil samples from the Earth’s side to the Earth. In the 2030s, efforts are to culminate in manned lunar landings and the construction of an outpost near the Moon South Pole.

Many artificial objects on the moon

The end of the Chang’e-4 mission is open – the Jade hare 2 will drive for some time on the lunar surface, the distance record for Mondrover holds at 39 kilometers still the Russian Lunochod 2 from his landing in 1973. Should the Jade hare 2 and the Landers become inoperative, they are among the now more than 80 inactive artificial objects on the moon. The first artificial object was the Russian space probe Lunik 2, which hit the moon in September 1959. The Ranger 4, Lunar Orbiter 1, Lunar Orbiter 2 and Lunar Orbiter 3 NASA probes, as well as the relay satellite of Japanese lunar orbiter Kaguya all crashed into the backof the moon. Still useful: Since their rediscovery in March 2010, the reflectors of the Russian lunar rovers Lunochod 1 (landing in November 1970) and 2 are used for laser rangefinding. When their position was still unknown in 1993, Sotheby’s New York auctioned Lunochod 1 and its Luna 17 landing platform for $ 68,500 to computer game entrepreneur and astronaut Richard Garriott – a fate that Chang’e 4 and Jadehasen 2 are not hitting fast likely.