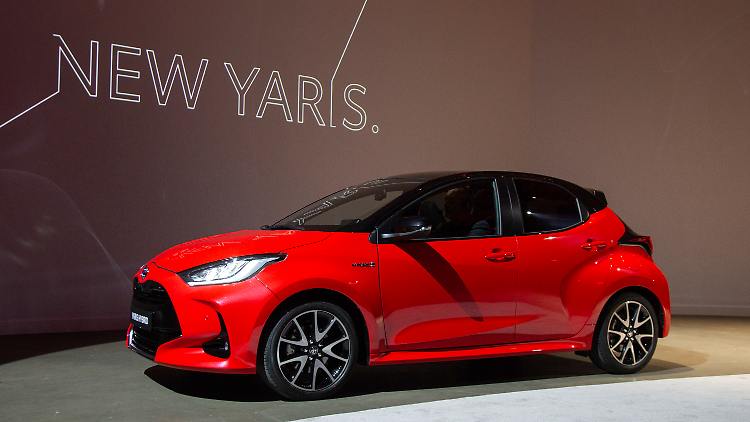 In 2018 he is the best-selling Toyota model in Germany: the Yaris. Now the bestseller is in a new edition. Visually, this is immediately apparent, but even under the hood, something is happening: The fourth generation of the small car is a small space miracle with a hybrid engine on board.

Toyota has been producing a small car Yaris in France for seven years. At that time it could be understood as a frontal attack on VW Polo, Ford Fiesta, Renault Clio and Co. Of the soon-to-be-missed third generation, over 70 per cent had a hybrid engine under the bonnet, making the four-meter car a half-electric vehicle. Now comes the fourth generation, for which not only the hybrid drive was completely redeveloped. Toyota celebrates the premiere of the completely new small car Yaris at the Tokyo Motor Show (October 24 to November 4).

The Yaris was also put on a completely new basement, the platform is to offer many freedoms for designers and engineers. The consequences are surprising. The little Japanese was a touch (five millimetres) shorter but inside noticeably larger. The trick: the distance between the axles was stretched by five centimetres, the wheels moved closer to the front and rear of the bodywork.

Inside much more space

A seat test on the back of the stalls results in significantly more distance between the knees and the back of the front seats. In addition, even for 1.80-meter passengers sufficient air between the main hair and roof covering. Although the Yaris is four inches flatter in total, but the new platform allows a deeper installation of the seats. Helpful against too intensive hip contact of the rear passengers are also five inches more width.

When designing the side of the Yaris bonds are recognizable in even smaller Toyota Aygo or idiosyncratic C-HR crossover. The characteristic line below the windows rises at the back to then unite with the sloping roof section. Quite a distinguishing feature in the small car herd.

In the front section, the designers defused the previously tapered bonnet over the distinctive grille. The rear, in turn, is reminiscent of the larger C-HR. This puts the Yaris visually closer to the newer models of the Toyota family.

The inner jewel of the new Yaris should be the new hybrid engine, which consists of the combination of a compact gasoline engine with an electric motor. In the current model, a 1.5-litre four-cylinder (74 hp) works together with a 61 hp electric motor. The Japanese have thoroughly modernized the power source and dispense with the combustion engine despite the same displacement on a cylinder.

Official data does not yet reveal Toyota, speaks of 15 per cent more power. Based on the predecessor, this would mean 115 hp. Similar in consumption: There is the talk of 20 per cent more efficiency – so the Yaris could be a real three-litre car.

Matthew Harrison, vice president of Toyota in Europe, still buys something out of the sleeve: “During test drives with prototypes in Rome, Paris and Darmstadt, the technicians have found that the engine in normal city driving in city traffic about 80 per cent of the time is not involved in the drive is, so no fumes generated “. As with the hybrid pioneer Prius, the electronics ensures that when the gas is taken off or rolling and of course when waiting at the traffic lights or in the traffic jam the petrol engine is switched off. In sum, this should ensure low consumption. Harrison expects that the Yaris will be mostly in cities on the road and so can exploit this advantage.

Equipment at the height of time

With modern electronic aids, the little one is almost like a big one. The vice president even speaks of the safest “compact car in the world”. Partially orderable in series are for example distance radar, lane-keeping and emergency brake assist. Via a head-up display important information such as speed, navigation data or warnings can be mirrored in front of the driver on the windscreen. Even delicacies such as LED headlights or networking with the digital environment are finding their way into the European Japan Mini.

The price of the hybrid model is not fixed yet but should approach closer to the 20,000-euro threshold than before. A good 80 per cent of buyers will opt for the “green” high-tech variant. If the Yaris comes on the streets in the middle of next year, sceptics will also have a traditional alternative: the four-door is as before also to have pure gasoline drive.