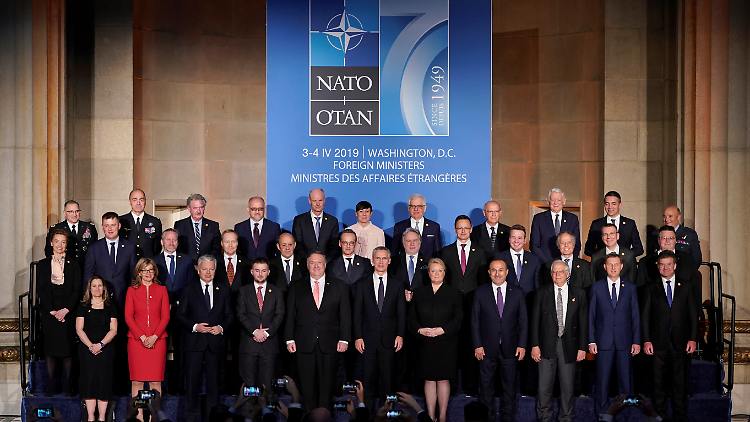 70 years ago, the “most successful military alliance in world history” was founded. On this occasion, the NATO allies in Washington meet. But the celebration is more like a crisis summit.

Anyone watching US Secretary of State Mike Pompeo open the 70th anniversary of NATO’s ceremony at the monumental Andrew W. Mellon Auditorium in Washington may well be tempted to think that everything is not all that bad. The gold-decorated hall, in which the North Atlantic Treaty was signed on 4 April 1949, is shrouded in warm light and Pompeo praises the alliance alongside NATO Secretary General Jens Stoltenberg as a “stunningly successful alliance”. He wanted to ensure with the partners that NATO can continue to function as a shield and stronghold in the future, says Pompeo. Just as the founding fathers had imagined the then US President Harry Truman.

But another performance is just a few hours back. In the afternoon, US Vice President Mike Pence had left no doubt that the uncomfortable times for the European allies are far from over. All in all, Donald Trump’s deputy made it clear that allies can rely on support only if they accept US conditions. According to this principle, the US determines how much money the Allies will have to spend on defense (at least two percent of the gross domestic product), from whom they should buy weapons and gas (not from Russia, but from the US) and who is the new big adversary ( China).

The fact that Germany adheres to the Russian-German gas pipeline project Nord Stream 2 was “simply unacceptable” and could make Germany a prisoner of Russia, criticized Pence. In addition, by 2024 at the latest Germany would have to spend not just the promised 1.5 percent of gross domestic product on defense, but two percent. Even harder sounds must be heard only Turkey, which has decided to buy a missile defense system from Russia. “Turkey must choose: Will she remain a crucial partner in the most successful military alliance in world history, or will she risk the security of this partnership by making irresponsible decisions that undermine this alliance?” Threatens Pence.

The new opponent is called China

An alliance of equal partners – that is probably something else. However, NATO and the European allies are in a dilemma. On the one hand, they know that the US rightly demands more ownership in defense. On the other hand, the question arises as to how NATO will function in the future, when the policy of the most important member is based on the gut feeling of the president and tough power calculus.

Part of the latter is that the US is focusing more and more on China because they see a much greater threat to their interests in the economically and militarily rising People’s Republic than in Russia, which still has many nuclear weapons, but not even economic power Italy has. China is perhaps “the biggest challenge” for NATO, Pence said the US standpoint for the anniversary celebration and criticized the European interest in Chinese technology for the expansion of the fast 5G mobile network and the so-called Silk Road Initiative, about the China, for example Wants to invest ports and other infrastructure in Europe.

In NATO countries such as Italy, France and Germany, such statements are likely to reinforce the impression that the current US government is less concerned with security than with its position as a military and economic superpower. Quite apart from the fact that one wants to see China more as a potential security cooperation partner than as a military opponent.

Public opposition was sought in vain at the opening of the NATO meeting. Secretary-General Stoltenberg, in his speech to the US Congress, cautiously reminded that the US needed Europe as a platform for its global operations, and that the Alliance was good for the United States for other reasons as well. “The strength of a nation is measured not only by the size of its economy, or by the number of its soldiers, but also by the number of its friends,” said the Norwegian. Having many friends and partners in NATO has made the US stronger and safer.

Eight years of Trump would endanger the alliance

Whether Trump sees the same thing may be doubted. This is at least suggested by the fact that he has repeatedly accused the Europeans of exploiting the US. And maybe also that he did not appear in person for the jubilee ceremony. Fearing that Trump might lead the US out of NATO, the Democratic-controlled House of Representatives even passed a bill in January that would make Trump’s way more difficult.

The problem is that a possible veto by Trump, on the other hand, could only be overruled by a two-thirds majority in both Congress chambers. At present, Nato’s hope can only be that Trump will not be re-elected in the autumn of next year. “The international order survives four years of Trump, even if it will not be the same as before,” said Ben Rhodes, one of the main advisors to former President Barack Obama, the IP magazine. “But eight years Trump would turn everything upside down, from US alliances to international institutions.”

Federal Foreign Minister Heiko Maas arrives in Washington after Pence delivers his speech. He had previously been in New York for three days to take over the chairmanship of the United Nations Security Council. Above all, he used the three-day stay to promote an idea he had last summer: an “alliance of multilateralists”. She is not directed against Trump, he says. But without Trump, who has terminated one international agreement after another over the past two years, he probably would not have gotten that idea either. He is still doing pretty well with his students at Columbia University in New York.

Maas: We keep our word

After a three-hour train ride, he is in Washington in a very different movie. For with their accusation of lack of defense spending Trump and Pence almost turn the tables, accusing Germany of weakening an international organization. The fact that Finance Minister Olaf Scholz, a few days before the NATO anniversary, the expenditure for the Bundeswehr in the medium-term financial planning has screwed back, complicates the appearance of the Secretary of State in Washington in addition.

He has come up with a remarkable phrase: “I know our budgetary procedure is sometimes difficult for outsiders to understand – and believe me: truly not just for outsiders.” He then adds, “But we have a clear commitment to invest more money in defense, and we keep our word.” Does that mean that medium-term planning should not be taken so seriously? That such an appeasement proves to have great effect on the allies, should be at least questionable.