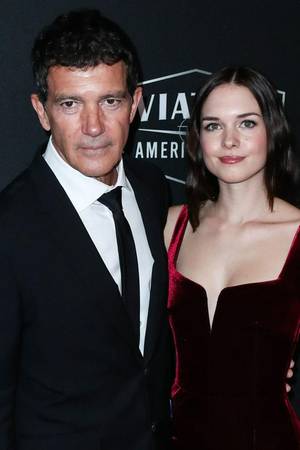 Good evening for Antonio Banderas: At the Hollywood Film Awards, he was joined by daughter Stella and ex-step-daughter Dakota Johnson.

Actress Antonio Banderas (59, “Security”) walked the red carpet of the Hollywood Film Awards on Sunday evening with his daughter Stella Banderas (23). Arm in arm they posed for the photographers, before it finally went to the award ceremony. The 59-year-old expected an award for his performance in the movie “Pain & Glory” – including a very special eulogy.

This was held by actress Dakota Johnson (30, “Fifty Shades of Gray”), Banderas’ former stepdaughter from the marriage with Melanie Griffith (62). “There are endless ways in which relationships and family dynamics develop when parents remarry,” Johnson began her eulogy. She came from a “family with many marriages” and had “the great luck” to have gotten Banderas “a bonus father”.

She sees him as a role model

When Griffith and Banderas married in 1996, Johnson was six years old. The actor was then joined by “an incredibly bright light” and “a completely new world of creativity and culture” to the family, says the 30-year-old today. He taught her what “passion and discipline” really meant and was one of those people who had the most influence on their lives.

“As a grown-up woman working in the same industry, I now understand that Antonio is one of our best artists in film, television and on stage, in multiple languages,” Johnson finished, according to “E! Online” the moving one Laudation to her ex-stepfather. He received the award visibly moved and dedicated it to the actress and his birth daughter Stella.

Dakota Johnson comes from Melanie Griffith’s second marriage to Don Johnson (69). After the divorce in 1996 Griffith married Banderas and got daughter Stella with him. The marriage lasted until 2015. Today, Banderas is romantically involved with the Dutch Nicole Kempel, and she was there on the evening of the Hollywood Film Awards.